The Dinosaurs Outside Your Window

Look outside your window and you will probably see dinosaurs. They are flying, hopping, chirping, and perching on trees. You call them birds, but they are dinosaurs.

They are not descended from dinosaurs. They are dinosaurs.

Biologically, they are the flying equivalent of the velociraptors that scared you in Jurassic Park. 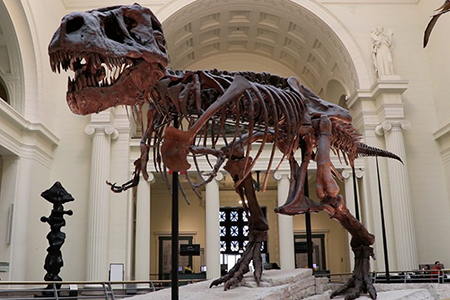 I was reminded of the marvelous wonders of the natural world and the fascinating evolution of science by a very readable new book, The Rise and Fall of the Dinosaurs: A New History of a Lost World by Steve Brusatte.

Brusatte, a 34-year old Illinois native and paleontologist at the University of Edinburgh, has the personality of a natural entertainer. His stories of dinosaurs and the people who love them bring paleontology to life. He knows how to entertain and educate so that science comes alive and you become engrossed in the stories of how knowledge expands and refines.

Dinosaurs are a wonderful example of how knowledge changes over time and how scientific conclusions must adjust to new facts and new understanding.

When I was young, dinosaurs were analyzed as though they were cold-blooded reptiles. Cold blood limits the amount of oxygen you can process. You can have a burst of speed, but then you must rest and recuperate.

Because of this belief in the reptile-like dinosaurs, they were portrayed in energy-saving postures. The Tyrannosaurus rex was depicted as upright but with its tail dragging on the ground. Furthermore, since we thought they were reptile-like and cold-blooded, we believed they could not be related to birds. 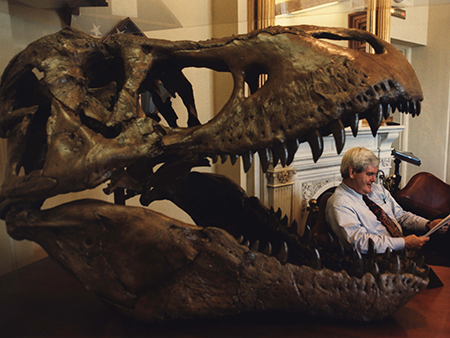 Dr. John Ostrom, a paleontologist at Yale University, began proposing that birds were dinosaurs in the 1970s — resurrecting a theory that Thomas Henry Huxley had first proposed in the 1860s. For a century, the scientific establishment had rejected Huxley and insisted that dinosaurs were reptiles, like lizards.

Dr. Ostrom and his charismatic, almost rabble rousing student, Bob Bakker, popularized Ostrom’s theories in a terrific book, The Dinosaur Heresies: New Theories Unlocking the Mystery of the Dinosaurs and Their Extinction.

At the time, what Ostrom was saying was seen as heresy by most of the older paleontologists. Yet, the nature of science is such that facts matter. The case for warm-blooded birds being dinosaurs became so strong that, by inference, the dinosaurs were warm-blooded. If they were warm-blooded, the museum exhibits had to be changed to represent a much more active more dynamic animal. Suddenly T-Rex was even more formidable and more frightening.

Brusatte outlines the evolution of our knowledge as new discoveries piled up on the side of the warm-blooded birds are dinosaurs thesis.

Then came the great discoveries of actual feathers on dinosaurs in China. Now, the linkages have become irrefutable.

Early feathers were very simple and apparently grown for warmth or for signaling. The prettier the feathers, the more likely the dinosaur was to attract a mate (patterns which certainly exist in birds today). Gradually, some dinosaurs began growing more complex feathers and began to learn how to fly. Then, their body shape changed and included lighter bones, less weight, and very strong chest muscles to power the wings. Suddenly, you have flying dinosaurs, which we now call birds.

One of Brusatte’s most interesting sections is on the lung systems that dinosaurs developed, which are so different from and much more powerful than mammal lung systems. Dinosaurs, like us, get oxygen out of incoming air that is inhaled, but they also have a system of air sacs that captures and momentarily stores some of the incoming air. When we exhale we send out carbon dioxide but get no new oxygen until we inhale again. Dinosaurs, on the other hand, get a second wave of oxygen to absorb when they release the stored fresh air from their air sacs. Essentially, they get two breaths of air each time they inhale. As the need for more air sacs grew, they infiltrated into bone structures. Classic dinosaur skeletons show the air sacs in bones, just like modern birds.

This double breath lung technique allows dinosaurs to have much more oxygen than mammals and gives them additional energy. It is a major factor in modern birds being able to fly at very high altitudes.

I strongly urge you to read The Rise and Fall of the Dinosaurs. It will both entertain and educate you.

In addition, I urge you to look around at the wonders of the natural world and take some time this summer to reflect on the amazing complexity of the world in which we live. Finally, I think you will have a renewed respect for the process of science and a renewed caution in believing that current “scientific consensus” is unchanging and unchallengeable.

If you have some young relatives or friends, give them a copy of Brusatte’s book. You might be launching a new paleontologist as they find themselves absorbed by his book and his personality.