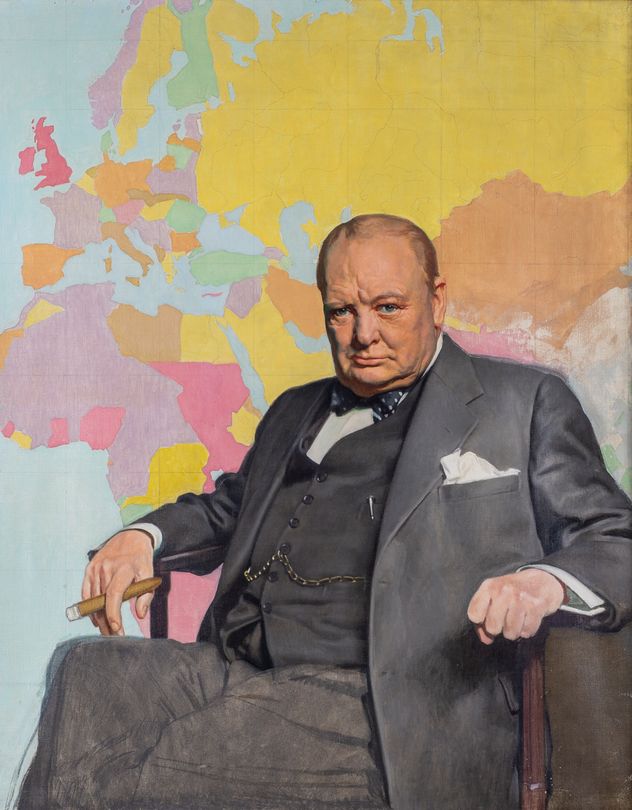 Two reasons to be grateful for this new life of Winston Churchill: first, it is unarguably the best single-volume biography of the man; second, as a result, no reasonable person will write a Churchill biography for years to come

Some of the best accounts of Churchill’s life were written by Churchill himself, setting his biographers some daunting competition. How do you write more eloquently than a man who wrote prose so fine it was deemed worthy (in 1953) of a Nobel Prize in literature?

Unlike the politicians of today, Churchill wrote his own words. Those words were patriotic, humane and fortifying, and they united his nation in times of ordeal. They were also linguistically impeccable, and frequently handsome, even when he was writing purely for money. Churchill’s language was the lifelong fruit of his having learned English grammar from a talented schoolmaster at Harrow. “Thus I got into my bones the essential structure of the ordinary British sentence,” he wrote in “My Early Life,” “which is a noble thing.” By the time of his death in 1965, at age 90, he had published 6.1 million words in 37 books—more than Shakespeare and Dickens put together. And that’s not counting his speeches, letters and memoranda.

By some accounts, 1,000 biographies exist already of the man who was voted the greatest Briton of all time in a poll 16 years ago. And yet, forcing his way into this teeming herd of Churchill biographers, is another one, Andrew Roberts, whose “Churchill: Walking With Destiny” weighs in at 1,100 pages and cannot be read (as this reviewer will testify) without the support of a table.

No one—not even Mr. Roberts, I suspect—can possibly claim to have read every single Churchill biography. I have read six, including two notable duds (by Roy Jenkins and Boris Johnson, respectively); and there may well have been a sense among readers, until this latest book arrived, that tackling the Churchill story had become a matter of dwindling returns. We now have two reasons to be grateful to Mr. Roberts: the first is that his is unarguably the best single-volume biography of Churchill (and so good that it makes redundant Martin Gilbert’s multi-volume labors); the second is that, as a result, no reasonable person will write a Churchill biography for years to come.

In his many public conversations about the book, Mr. Roberts has sought to justify adding to the Churchill pile by pointing to his access to sources hitherto unavailable, particularly the notes written in his diary by King George VI after his weekly lunches with Churchill during World War II. That is a gracious doff of the hat by Mr. Roberts to Britain’s upright but dull-witted wartime king; in truth, the excerpts from the diaries tell us more about George VI than they do about his prime minister.

An example, from May 10, 1940: Neville Chamberlain is about to resign. When the king summons Churchill to ask him to become prime minister, he says to him: “I suppose you don’t know why I have sent for you?” To which the mischievous Churchill responds: “Sir, I simply couldn’t imagine why.” As Mr. Roberts writes, “it is clear from the King’s own diary account that he genuinely thought Churchill did not know why he had been sent for, and took seriously Churchill’s reply to what Churchill had thought was a joke.” (The diary entry reads: “I sent for Winston and asked him to form a government. This he accepted and told me that he had not thought this was the reason for my having sent for him.”)

Mr. Roberts need not oversell the allure of his new regal sources, welcome though they may be. The book is a brilliant feat of storytelling, monumental in scope, yet put together with tenderness for a man who had always believed that he would be Britain’s savior. At age 16, in 1891, Churchill told a friend that he could see “great upheavals, terrible struggles; wars such as one cannot imagine.” London, the disconcertingly clairvoyant young Churchill continued, “will be in danger, and in the high position I shall occupy, it will fall to me to save the capital and save the Empire.”

In “The Gathering Storm,” the first volume of his war memoirs, Churchill recalled the evening he became prime minister, only hours after Hitler launched his Blitzkrieg on Western Europe. “I felt as if I were walking with destiny,” he wrote, “and that all my past life had been but a preparation for this hour and for this trial.” Mr. Roberts has inhaled deeply of this Churchillian spirit, and his book is, in many ways, a chronicle of a life foretold.

Churchill’s childhood was a mix of the despondency and exhilaration that stayed with him till he died. Neglected by his beautiful American mother and treated callously by his aristocratic father (a direct descendent of the 1st Duke of Marlborough), he was loved and raised by his nanny (whom he called “Woom” and who called him “Winny”). He was a mutinous schoolboy, once telling the head-boy of Harrow, who was beating him on the bottom, that “I shall be a greater man than you.” In an early act of courage and chivalry, he took his nanny on a guided tour through his elitist school, eliciting jeers from the boys who stood by. “This lack of friendly support from conventional and priggish contemporaries,” Mr. Roberts writes, “was to dog Churchill for almost the rest of his life.”

Mr. Roberts’s narrative structure follows an unfussy chronological pattern from birth to death, with everything in between. But there’s not a moment’s dullness in this book, with every account of his subject’s many character flaws riveted to a larger context. “His obsession with the Empire,” Mr. Roberts writes, “would help to bind its peoples together as it came under unimaginable stress, and his chauvinism left him certain that . . . the British would prevail over the Germans.”

Churchill was often disparaged for his pushiness—in which judgment, Mr. Roberts says, there was an undercurrent of anti-Americanism. (Given Churchill’s American mother, the writer Hilaire Belloc felt entitled to call him a “Yankee careerist.”) Mr. Roberts explains Churchill’s assertiveness as a product of his fear of dying young, which led him to live life at full pelt. “Churchill believed he had only a short time to live, and regularly referred to his father’s death at forty-five as the explanation for his own thrusting nature.”

For all his erudition, Mr. Roberts is a popular historian, not an academic one, and he writes with the flair of a man who has made a living wielding his words for newspapers and magazines. His account of Churchill “seizing the premiership” in May 1940 is as compelling a tick-tock—journalists’ jargon for a blow-by-blow account of an event of a defined period of time—as anything written for the front page of this newspaper.

Mr. Roberts stitches together with sublime skill the sequence of events that led to the passing of the baton of leadership from Chamberlain to Churchill—bypassing Lord Halifax, the foreign secretary, who was also in contention for the prime minister’s job, but whose membership of the House of Lords posed political problems. Halifax, writes Mr. Roberts, put national interest above personal ambition in ceding the premiership to the energetic, ambitious but not (at the time) widely liked Churchill.

The book is an unapologetic tribute to Churchill but not a hagiography. Mr. Roberts does not duck the difficult issues, such as the currently fashionable attribution to Churchill of responsibility for the horrific Bengal Famine of 1943. “I hate Indians,” he apparently told Leo Amery, his secretary of state for India and Burma. “They are a beastly people with a beastly religion.” And yet, Mr. Roberts points out, the same Churchill praised “the unsurpassed bravery of Indian soldiers and officers.” To those who assert that Churchill was responsible for a genocide-by-starvation in Bengal, Mr. Roberts says “the truth could not be more different.”

In response to this and other morally awkward episodes in Churchill’s life, Mr. Roberts plays the role not of apologist but of explicator. He goes to lengths to explain how shipping grain to Bengal in wartime—whether from Canada or Australia—was fraught with naval peril; besides, Churchill “simply could not spare the shipping” due to its need in military operations. “To reduce the desperately difficult moral decisions that Churchill and many others had to take to the level of accusations of deliberate genocide is biased and unhistorical,” Mr. Roberts writes, while also raising questions that Indians themselves are inclined to duck in the general rush to pin blame on Churchill: What was the role played by Indian merchants who hoarded grain in the hopes of making a killing (as it were) as prices rose in a time of scarcity? And why did grain-rich Indian states not help to feed the people of Bengal?

Mr. Roberts’s concluding chapter offers an admirably honest catalog of Churchill’s many mistakes, culled from the longer treatment each one receives in the main body of the book. These include supporting the paramilitary Black and Tans in Ireland; backing Edward VIII during the abdication crisis; fighting against Indian self-government; rejoining the Gold Standard; and failing to appreciate the martial determination of the Japanese. Even as late as September 1941, Mr. Roberts writes, “Churchill was still saying that the Japanese would climb down in the face of the Western oil embargo, whereas in fact it may have been the need for oil that drove the bellicose elements in the Japanese Government to put the Empire on the road to all-out war.”

Alongside this litany of errors, Mr. Roberts counterposes Churchill’s many achievements, not least of which was, if one may put it this way, the salvation of Britain. “The important point about Churchill in 1940 is not that he stopped a German invasion that year,” Mr. Roberts writes, “but that he stopped the British Government from making peace.” And when it came to the three “mortal threats posed to Western civilization, by the Prussian militarists in 1914, the Nazis in the 1930s and 1940s and Soviet Communism after the Second World War, Churchill’s judgement stood far above” that of those around him. Churchill, says Mr. Roberts, was “the last aristocrat to rule Britain.” He may not have been of the people; but he was, in his own mind, always with them.

One thought on “‘Churchill: Walking With Destiny’ Review: A Life at Full Pelt”