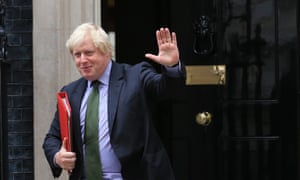 Conservative leadership contenders will shepherd the party to disaster if they adopt the “comfort blanket of populism” in response to Nigel Farage, scores of Tory MPs will warn this week.

Eight cabinet ministers are among a group of 60 modernising MPs who will call on contenders for the leadership to “reject narrow nationalism” in their quest to replace Theresa May. The warning comes with Boris Johnson and Dominic Raab, who have both said they are willing to back a no-deal Brexit, emerging as the favourites among Tory members. Johnson is the frontrunner.

The One Nation group of Tory MPs, which includes cabinet ministers David Gauke, Amber Rudd, Rory Stewart and Greg Clark and ministers of state Caroline Nokes and Claire Perry, who also attend cabinet meetings, will issue their warning as they launch their declaration of values in parliament on Monday. It forms part of a push to stop the party lurching towards a no-deal Brexit in reaction to surging support for Farage’s Brexit party ahead of this week’s European elections. Such is the concern in moderate Tory circles that the group last night won the backing of the former prime minister Sir John Major.

Writing on guardian.co.uk, a group of the MPs – George Freeman, Chloe Smith, Nicky Morgan, Damian Green, Bim Afolami and Nicholas Soames – warns that the party’s greatest danger now is “being overtaken by a divisive and populist movement” masquerading as grassroots conservatism.

“We have all seen the growing tide of extremism gripping the Republican party in America,” they say. “We would be naïve to think something similar couldn’t happen in this country. In many places, it already is. Our nation is at a crossroads and so is our party.”

Soames, a grandson of Winston Churchill and minister in Major’s government, said: “We cannot succumb to the comfort blanket of populism. The Conservative party has survived through wars and decades of economic and social turbulence. But no party has a divine right to exist and unless the party embraces the future it will cease to be relevant to the lives of the people we exist to support.”

The move comes as May launches one last big push to secure support for her beleaguered Brexit deal. This week the prime minister will make a “bold offer” to Labour, Democratic Unionist (DUP) and Tory critics of her deal in a final attempt to secure parliamentary backing.

Her modified deal will include new guarantees on workers’ rights to placate Labour. It will have assurances that British and Northern Irish standards will remain aligned, in an appeal to the DUP. Finally, she will attempt to strengthen reassurances to Tory Brexiters that the so-called Irish backstop, which could effectively keep the UK in the EU customs union, would not come into effect.

May is also preparing to hold a series of indicative votes to find out what kind of customs union, if any, could secure a majority among MPs. She will present her new withdrawal agreement bill to the cabinet this week before revealing details in a speech days later and putting it to a vote in the first week of June.

“The government have been negotiating with Labour for an agreement to build the biggest level of support across parliament for the withdrawal agreement bill,” a government source said. “Labour have been clear that they have not ruled out supporting it if the overall package is acceptable. We intend to make a bold offer that will allow parliament to back the bill, get the deal over the line – and deliver Brexit.”

May is widely expected to trigger a leadership election should the new deal be voted down, meaning it is likely that there are just weeks of her premiership left.

With the Brexit party leading in all polls ahead of the European elections, many Tory MPs sceptical of Johnson’s qualities are now considering whether they can back him. One May loyalist minister said Johnson was “Trump-esque” in his tactics, but added: “People may take the view that he is the only one who could change things or make something happen. Nobody knows what.”

Even May loyalists in cabinet do not expect her to stay once her Brexit deal is voted down.

“We’re now heading to the inevitable last roll of the dice,” said one cabinet minister. “An attempt to get the withdrawal agreement bill through. At that point, she can say she has tried everything and tried her best but hasn’t been able to get Brexit through. At that point, you could prorogue parliament and have a [leadership] contest over the summer. You would want the new leader to be able to organise conference.”

Another said: “The best thing would be for her to pass over to [her de facto deputy and former Europe minister] David Lidington. It would stop her having to pass on directly to the next PM. That would put David Cameron’s Mr Europe in charge.”

… but The Guardian definitely isn’t. In the current climate of uncertainty and tension, we remain deeply committed to our European coverage. In the coming weeks and months, we will continue our mission to look outwards rather than inwards, to stay connected and inclusive.

As the EU elections approach, we will hear daily from our correspondents across Europe, explore and investigate the themes that divide and unite the continent, with all its imperfections, challenges and strengths. The Guardian aims to offer its readers a global perspective on these important events.

More people are reading and supporting our independent, investigative reporting than ever before. And unlike many news organisations, we have chosen an approach that allows us to keep our journalism accessible to all, regardless of where they live or what they can afford.

The Guardian is editorially independent, meaning we set our own agenda. Our journalism is free from commercial bias and not influenced by billionaire owners, politicians or shareholders. No one edits our editor. No one steers our opinion. This is important as it enables us to give a voice to those less heard, challenge the powerful and hold them to account. It’s what makes us different to so many others in the media, at a time when factual, honest reporting is critical.

Every contribution we receive from readers like you, big or small, goes directly into funding our journalism. This support enables us to keep working as we do – but we must maintain and build on it for every year to come. Support The Guardian from as little as $1 – and it only takes a minute. Thank you.