She was the ultimate screen goddess, who gave it all up, dedicating herself to protecting animals for the past 46 years. Now, in a forthcoming memoir, Brigitte Bardot laments the destructive nature of celebrity, saying it suffocated her and robbed her of the ability to go anywhere without being approached by strangers, some of whom wanted to embrace and touch her.

“I know what it feels like to be hunted,” she says.

Now 84, she rose to fame after the success of films including And God Created Women. But in 1973, at the height of her career, she left it all behind. 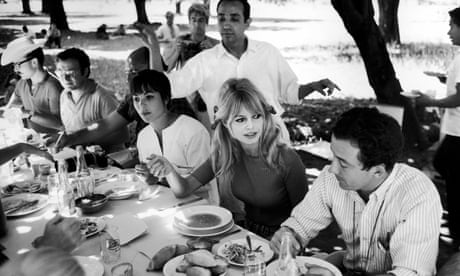 Frozen in Time: Brigitte Bardot on set in Mexico, February 1965

Singling out screen legends such as Marilyn Monroe and Marlene Dietrich, who died alone, she said: “The majority of great actresses met tragic ends. When I said goodbye to this job, to this life of opulence and glitter, images and adoration, the quest to be desired, I was saving my life.”

She added: “This worship of celebrity … suffocated me.”

Her book, Tears of Battle: An Animal Rights Memoir, is a collaboration with Anne-Cécile Huprelle and Grace McQuillan and will be published in April by Skyhorse Publishing. She dedicates it to animals and writes of her despair in human beings, whom she says inflict all sorts of evils and sufferings upon them for their own needs, leisure and pleasure. It is the first English edition of a book published in French last year.

She said: “Humans have hurt me. Deeply. And it is only with animals, with nature, that I found peace.”

Bardot was the ultimate pin-up, the epitome of beauty, but she says she never felt beautiful. As a child, she told herself: “I’m ugly.”

She writes of her extreme shyness: “The sheer dread … that fills me when I am face-to-face with most humans … made me suffer atrociously during my life as an actress.”

She adds: “In the beginning, I enjoyed having people talking about me, but very quickly, it suffocated and destroyed me. Throughout my 20 years starring in movies, each time filming began, I would break out with herpes.”

Bardot spoke of men who “didn’t know how to separate the love they felt for me from what I represented in the eyes of the world”. She said photographers hounded her, their cameras emerging from behind a bush or a rubbish bin. “I could sense their presence, the watching,” she said.

She dreams of a life of almost complete anonymity. “I don’t know what it means to sit quietly in a bistro, on a terrace, or in the theatre without being approached by someone,” she said.

The idea of visiting a restaurant fills her with dread. She said: “People will come up to me. They’ll be watching what Brigitte Bardot is eating, how she holds her fork. They will ask for yet another photo. I have never refused. But I still can’t stand being watched. Certain people … want to embrace me, to touch me.”

Most of the book is devoted to animals. She talks extensively about the “unspeakable suffering” to which they are subjected by “man’s barbarism every day”.

“Do you know, for example, what is done to certain male chicks? They are crushed alive because they are unable to lay eggs and because they do not possess the same assets as chickens raised for their flesh.”

Describing the achievements of the Brigitte Bardot Foundation, her organisation dedicated to the protection of animals, she said: “We have financed the construction of a wild animal hospital in Chile, as well as a park to care for mistreated bears in Bulgaria, for koalas in Australia, for elephants in Thailand, and for horses in Tunisia. If the foundation wasn’t active, a great many species conservation programmes would be non-existent.

“In a way, humanity remains like an animal. It functions as a herd. Man is fundamentally selfish, and most people do not react to a cause unless it directly affects them … I want the public to be indignant, to come out of its comfort zone.”

However, Bardot’s views on animal welfare have led to her being condemned by French courts for anti-Muslim comments, and fined. She faced French judges five times for “incitement to racial hatred” between 1997 and 2008.