EU needs a   chairperson who can keep France by the EU !

Cristine is a financial expert,  the best   available .

She previously held various senior ministerial posts in the Government of France: she was Minister of the Economy, Finance and Industry (2007–2011), Minister of Agriculture and Fishing (2007) and Minister of Commerce (2005–2007). Lagarde was the first woman to become Finance Minister of a G8 economy and is the first woman to head the IMF. A noted anti-trust and labour lawyer, Lagarde was the first female chairman of the major international law firm Baker & McKenzie, between 1999 and 2004. On 16 November 2009, the Financial Times ranked her the best Finance Minister in the Eurozone.[2]

On 28 June 2011, she was named as the next Managing Director of the IMF for a five-year term, starting on 5 July 2011,[3][4][5] replacing Dominique Strauss-Kahn. Her appointment is the 11th consecutive appointment of a European to head the IMF.[6] In 2014, Lagarde was ranked the 5th most powerful woman in the world by Forbesmagazine. She was reelected by consensus for a second five-year term, starting 5 July 2016, being the only candidate nominated for the post of Managing Director.[7] In December 2016, a French court found her guilty of negligence for her role in the Bernard Tapiearbitration, but did not impose a penalty. In 2018, Forbes ranked her number three on its World’s 100 Most Powerful Women list.[8]

Lagarde was born in Paris, France,[9] into a family of academics. Her father, Robert Lallouette, was a Professor of English; her mother, Nicole (Carré),[10] was a Latin, Greek and French literature teacher. Lagarde and her three brothers, all younger, spent their childhood in Le Havre where she attended the Lycée François 1er and Lycée Claude Monet.[11][12][13] As a teenager, Lagarde was a member of the French national synchronised swimming team.[14]After her baccalauréat in 1973, she went on an American Field Service scholarship to the Holton-Arms School in Bethesda, Maryland.[15][16] During her year in the United States, Lagarde worked as an intern at the U.S. Capitol as Representative William Cohen‘s congressional assistant, helping him correspond with French-speaking constituents during the Watergate hearings.[15][16]She graduated from Paris West University Nanterre La Défense, where she obtained master’s degrees in English, labor law, and social law.[17][18] She also holds a master’s degree from the Institut d’études politiques in Aix-en-Provence.[14][19] Since 2010, she has presided over the Aix school’s board of directors.[20] She also prepared for the École nationale d’administration‘s entrance exam but ultimately failed to gain admission to the elite school.[21]

A health-conscious vegetarian who rarely drinks alcohol,[11][23][24][25] Lagarde’s hobbies include regular trips to the gym, cycling, and swimming.[13]

Lagarde joined Baker & McKenzie, a large Chicago-based international law firm, in 1981. She handled major antitrust and labour cases, was made partner after six years and was named head of the firm in Western Europe. She joined the Executive Committee in 1995 and was elected the company’s first female chairman in October 1999.[26][27][28][29]

In 2004, Lagarde became President of the Global Strategic Committee.[30]

As France’s Trade Minister between 2005 and May 2007, Lagarde prioritized opening new markets for the country’s products, focusing on the technology sector. On 18 May 2007, she was moved to the Ministry of Agriculture as part of the government of François Fillon.[31] The following month she joined François Fillon‘s cabinet in the Ministry of Economic Affairs,[32] Finance and Employment to become the first woman in charge of economic policy in France.[citation needed] She was the only member of the French political class to condemn Jean-Paul Guerlain‘s racist remarks of 2010.[33]

On 25 May 2011, Lagarde announced her candidacy to be head of the IMF to succeed Dominique Strauss-Kahn, upon his resignation.[34] Her candidacy received the support of the British, Indian, United States, Brazilian, Russian, Chinese and German governments.[35][36][37][38][39] The Governor of the Bank of Mexico (and former Mexican Secretary of Finance) Agustín Carstens was also nominated for the post. His candidacy was supported by many Latin American governments, as well as Spain, Canada and Australia.[35]

On 28 June 2011, the IMF board elected Lagarde as its next Managing Director and Chairman for a five-year term, starting on 5 July 2011.[3][4][5] The IMF’s executive board praised both candidates as well-qualified, but decided on Lagarde by consensus. Lagarde became the first woman to be elected as the head of the IMF.[3]Carstens would have been the first non-European. Her appointment came amid the intensification of the European sovereign debt crisis especially in Greece, with fears looming of loan defaults. The United States in particular supported her speedy appointment in light of the fragility of Europe’s economic situation.[40]

U.S. Treasury Secretary Timothy Geithner said that Lagarde’s “exceptional talent and broad experience will provide invaluable leadership for this indispensable institution at a critical time for the global economy.”[5] Nicolas Sarkozy referred to Lagarde’s appointment as “a victory for France.” Oxfam, a charity working in developing nations, called the appointment process “farcical” and argued that what it saw as a lack of transparency hurt the IMF’s credibility.[41]

On 17 December 2015, Michel Sapin, French Finance Minister, said that Lagarde could stay on as head of the IMF, despite being charged with criminal negligence.[42] Throughout her time at the IMF, she has repeatedly ruled herself out of the races to secure a top job in Europe, including the positions of President of the European Commission or President of the European Central Bank.[43]

Alistair Darling (left) with Lagarde and Timothy Geithner(right) in 2009

In July 2010, Lagarde told the PBS NewsHour that the IMF’s lending program for distressed European countries was “a very massive plan, totally unexpected, totally counter-treaty, because it wasn’t scheduled in the treaty that we should do a bailout program, as we did.” She also said, “we had essentially a trillion dollars on the table to confront any market attack that would target any country, whether it’s Greece, Spain, Portugal, or anybody within the eurozone.” With respect to the French economy, she stated that besides short-term stimulus efforts: “we must, very decisively, cut our deficit and reduce our debt.”[44]

In public remarks made right after her appointment, Lagarde stated that both the IMF and EU required Greek austerity measures as a prerequisite for further aid. She said, “If I have one message tonight about Greece, it is to call on the Greek political opposition to support the party that is currently in power in a spirit of national unity.”[5] She said of her predecessor that: “The IMF has taken up the challenges of the crisis thanks to the actions of [Managing Director] Dominique Strauss-Kahn and to his team as well.”[38] On 25 December 2011, Lagarde argued that the world economy was at risk and urged Europeans to unify in terms of the debt crisis facing the continent.[45] 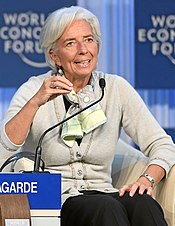 Lagarde during the World Economic Forum 2013

In July 2012, as the Greek economy continued to decline, and the country’s leaders asked for an easing of the terms of external assistance, Lagarde said she was “not in the negotiation or renegotiation mood at all.”[46][47] A year later, though, with her own organization conceding that its “rescue” package for Greece had fallen short of what was required, Lagarde—having previously said that Greece’s debt burden was “sustainable”—decided that Greece would not recover unless its debt was written off in a meaningful way.[48][49] According to Yanis Varoufakis, the combative former finance minister of Greece, Lagarde and others at the top of the IMF have been quite sympathetic behind closed doors.[50] As the crisis peaked again in summer 2015, Lagarde’s organization made headlines by calling for massive debt relief for Greece,[51] a call she reiterated personally.[52] In 2016, the IMF refused to participate with eurozone countries in further emergency financing for Greece, because concrete measures to relieve the country of its debt burden remained absent.[53] 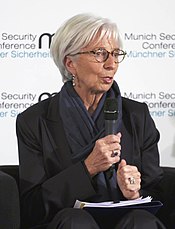 Lagarde during the Munich Security Conference 2018

Questioned about her economic philosophy, Lagarde has described herself as “with Adam Smith—that is, liberal.”[25]

In an interview in May 2012, Lagarde was asked about crisis-stricken Greece, but opted for a less than sympathetic response. She drily referred to Greek tax avoidance, and assented to the interviewer’s suggestion that Greeks had “had a nice time” but now “it’s payback time.”[54][55] Her comments provoked controversy: Deputy Prime Minister of Greece Evangelos Venizelos said she had “insulted the Greek people”, while Greek Prime Minister Alexis Tsipras declared: “We don’t need her compassion.”[56][57] In an effort to quell the negative response, the next day Lagarde updated her Facebook page with: “As I have said many times before, I am very sympathetic to the Greek people and the challenges they are facing.”[58] Within 24 hours, over 10,000 comments had been left in response, many of them obscene.[56] To her accusations that not enough Greeks paid their taxes, Professor Emeritus John Weeks of the University of London retorted: “The moral weight of Christine Lagarde’s matronising of the Greeks to pay their taxes is not strengthened by the fact that, as director of the IMF, she is in receipt of a tax-free annual salary of $468,000 (£298,000, plus perks).”[59][60] In her defense, “No taxes is the norm for most United Nations employees covered by a convention on diplomatic relations signed by most nations.”[61]

In January 2015, on the death of King Abdullah of Saudi Arabia, Lagarde said “he was a strong believer in pushing forward women’s rights”,[62] prompting a number of observers to comment on the life of women generally in Saudi Arabia.[63]

In 2010 Lagarde, then Finance Minister of France, sent a list of 1,991 names of Greek customers who were potential tax avoiders with bank accounts at HSBC‘s Geneva branch to the Greek government.[64]

On 28 October 2012, Greek reporter and editor Kostas Vaxevanis claimed to be in possession of the list and published a document with more than 2,000 names in his magazine Hot Doc.[65][66] He was immediately arrested on charges of breaching privacy laws with a possible sentence of up to two years in prison.[67] After a public outcry, Vaxevanis was found not guilty three days later.[68] Vaxevanis then faced a retrial (the Greek authorities were yet to charge anyone on the list),[69] but was acquitted again. A few days before the Greek general elections of January 2015, when it was clear that left-wing Syriza would come to power, the financial crimes police of the conservative government of Antonis Samaras shredded reams of documents pertaining to corruption cases.[70]

On 3 August 2011, a French court ordered an investigation into Lagarde’s role in a €403 million arbitration deal in favour of businessman Bernard Tapie.[71] On 20 March 2013, Lagarde’s apartment in Paris was raided by French police as part of the investigation.[72] On 24 May 2013, after two days of questioning at the Court of Justice of the Republic (CJR), Lagarde was assigned the status of “assisted witness”, meaning that she was not herself under investigation in the affair.[73] According to a press report from June 2013, Lagarde was described by Stéphane Richard, the CEO of France Telecom (a former aide to Lagarde when she was Finance Minister), who was himself put under formal investigation in the case, as having been fully briefed before approving the arbitration process which benefitted Bernard Tapie.[74][75] Subsequently, in August 2014 the CJR announced that it had formally approved a negligence investigation into Lagarde’s role in the arbitration of the Tapie case.[76] On 17 December 2015, the CJR ordered Lagarde to stand trial before it for alleged negligence in handling the Tapie arbitration approval.[77][78][79] In December 2016, the court found Lagarde guilty of negligence, but declined to impose a penalty.[80]

Lagarde was interviewed in the documentary film Inside Job (2010), which later won an Academy Award for Best Documentary Feature.[81][82]

Lagarde was portrayed by actress Laila Robins in the 2011 HBO television drama Too Big to Fail, which was based on the popular book of the same name by New York Times journalist Andrew Ross Sorkin.[83]

In 2014, Lagarde was named the fifth most powerful woman in the world by Forbes magazine.[86]

In 2017, Lagarde was listed by UK-based company Richtopia at number 1 in the list of 100 Most Influential People in Multinational Organisations.[87]