John Bercow has said he plans to stay in his post as Speaker of the House of Commons despite previous expectations he was about to leave, risking the fury of hardline Eurosceptics who believe he wants to thwart a no-deal Brexit.

The Speaker told the Guardian it was not “sensible to vacate the chair” while there were major issues before parliament. And, amid growing indications that frontrunners for the Conservative leadership are willing to depart the EU without a deal, he warned candidates not to try to force such an outcome without the permission of MPs.

Bercow had told friends he intended to stand down as Speaker this summer, possibly in July, after concluding 10 years in the post. But his remarks on Tuesday appear to confirm reports he was reconsidering after the UK did not leave the EU at the end of March.

Speaking to the Guardian after a speech in Washington, Bercow said: “I’ve never said anything about going in July of this year. Secondly, I do feel that now is a time in which momentous events are taking place and there are great issues to be resolved and in those circumstances, it doesn’t seem to me sensible to vacate the chair.” 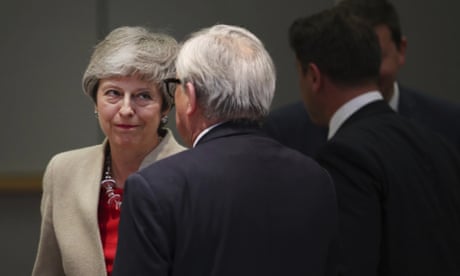 He added: “If I had any intention to announce on that matter … I would do so to parliament first.”

The clarification of his position will enrage hard-Brexit Conservatives who had once expected his departure to ease their task in the months ahead of the 31 October deadline.

MPs have already voted against leaving the EU without a deal at the end of March, but some of the Conservative leadership candidates – Boris Johnson, Dominic Raab and Esther McVey – have said they would be prepared to leave the EU, deal or no deal, at the end of October.

Raab even suggested he would be ready to ignore the will of parliament in order to do so, telling BBC One’s The Andrew Marr Show: “It’s very difficult for parliament now to legislate against a no deal, or in favour of a further extension, unless a resolute prime minister is willing to acquiesce in that – and I would not.”

Bercow’s intervention followed another day of jockeying for position among the Tory leadership hopefuls, with candidates’ positions on a hard Brexit viewed as the central issue after the Brexit party’s success in the European elections helped drive the Conservatives into fifth place.

After the entry of Kit Malthouse, a former deputy mayor to Boris Johnson, to the race, an 11th candidate, James Cleverly, was also preparing to announce his candidacy.

Malthouse was a surprise addition to the race, who said he was the man to deliver the “Malthouse compromise” on Brexit, which was named after him. The compromise – replacing the Irish backstop with alternative arrangements, or negotiating a longer-term transition to a no-deal exit – has been backed by Conservative leavers and remainers but was rejected as unworkable by Downing Street.

He raised eyebrows on Tuesday by suggesting the government could buy up lamb chops to feed to schoolchildren in the event of no deal. Malthouse told LBC: “Something like 80,000 tonnes of sheep meat is exported every year. Now if we go out with no deal, they think that will be significantly affected … could we use it in hospitals and in schools?”

Others who may yet declare include the hardline Eurosceptic Steve Baker, Stephen Barclay, the Brexit secretary, Penny Mordaunt, the defence secretary, the Treasury minister Jesse Norman, the former development secretary Priti Patel and Graham Brady, until recently the chair of the 1922 Committee.

While many Conservatives view Bercow’s claims of neutrality with scepticism, he insisted to a mostly academic audience at the Brookings Institution on Tuesday that he was simply a fierce defender of parliament’s rights.

But he added: “There is a difference between a legal default position and what the interplay of political forces in parliament will facilitate.” He said he would like to be remembered “as a backbenchers’ champion”.

If Bercow stays on longer as Speaker, it will infuriate pro-Brexit Tories who regard him as biased against leaving the EU, potentially resulting in another attempt to oust him, although it would be unlikely to succeed at this stage.

This month, Bercow was reported by his local paper to have said he would not be staying on as Speaker “much longer”. But in January, friends of Bercow told the Observer he was “seriously reflecting” on whether to stay on – possibly until 2022 – after cabinet ministers threatened to deny him a peerage because of his alleged “bias” against the government over Brexit.