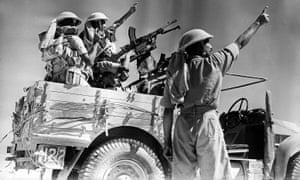 In the spring of 1940 Winston Churchill gave three landmark parliamentary speeches, in close succession. In each he coined an array of extraordinary phrases, which almost immediately became part of the everyday language millions of people, in Britain and across the world, used to make sense of the conflict. The most powerful have, like terms coined by Shakespeare and George Orwell, become embedded in the English language.

From Churchill’s 13 May speech came the solemn prophecy of “blood, toil, tears and sweat”. From the speech of 4 June came the defiant call to arms, “we shall fight on the beaches”. And two weeks week later, on 18 June, Churchill gifted the nation with the potent and galvanising concept of the “finest hour”. Such phrases were so exquisitely judged that little beyond them survives in the national memory.

Forgotten from the “blood, toil, tears and sweat” speech is the warning that without victory over Germany not only might the British nation perish but that there could be “no survival for the British empire, no survival for all that the British empire has stood for”. Lost from the “we shall fight on the beaches” speech is Churchill’s prediction that if Britain “were subjugated and starving, then our empire beyond the seas, armed and guarded by the British fleet, would carry on the struggle”. And forgotten from the “finest hour” speech are the word’s directly leading up to those two, magical words, “if the British empire and its commonwealth last for 1,000 years, men will still say ‘This was their finest hour’”.

Churchill’s references to the empire in many of his most famous speeches are small reminders of a big reality. Britain fought the second world war with men and money partly drawn from the empire and that, after the defence of the home islands, the survival of the empire was a fundamental war aim.

Before the war Churchill had been willing, in private at least, to acknowledge that the age of empire was drawing to a close. In 1937 he confided to the governor-general of India, Lord Linlithgow, that although he wanted “to see the British empire persevered for a few more generations in its strength and splendour”, he was aware that “only the most prodigious exertions of British genius will achieve this result”.

Churchill’s fear that the empire might not last even “a few more generations” was perhaps apparent when, in November 1942, he gave a speech at the Mansion House, as the tide of the war turned in favour of the allies. He remarked, in a statement quoted by most of his biographers, “I have not become the King’s first minister in order to preside over the liquidation of the British empire.” The sentence that followed is quoted far less often: “For that task, if ever it were prescribed,” Churchill warned, “someone else would have to be found.” When the moment for liquidating the empire, or at least for bringing down the curtain on 200 years of British rule in India arrived, Churchill watched from the backbenches.

On the night of 14 August 1947 it was the turn of Jawaharlal Nehru, independent India’s first prime minister, to deliver his own immortal phrase: “At the stroke of the midnight hour,” he told the Indian Constituent Assembly, “when the world sleeps, India will awake to life and freedom.” That stroke of midnight arrived seven years, one month and 27 days after Churchill had beguiled parliament and the British people with the rhetorical vision of an empire that might last 1,000 years.

During the recent centenary of the first world war it was noted by a number of historians that our understanding of that conflict has been distorted by the verses of war poets eclipsing the accounts of generals and politicians. In the case of the second world war the distorting factor is not poetry but our seemingly insatiable need to view the war through the prism of national mythology.

The necessary myths that were created during the war, by the Ministry of Information and the press, provided the original frame, within which a thick tangle of misremembering and politicised myth-making has grown. These thickets now partly obscure the military and the political history of the conflict.

First among them is the myth of Dunkirk, the transformation of a humiliating, costly defeat into a glorious, unlikely victory. Desperately needed to shore up morale, but pulled apart by later analysis, that vision of the “little ships” and the “Dunkirk spirit” is still celebrated, largely uncritically, seven decades later.

Then there is the myth of the Blitz, the claim that the stoicism that was unquestionably displayed by much of the British public under aerial bombardment, was of a different order of moral magnitude to the courage displayed by German, French or Japanese civilians under similar circumstances. In addition to these myths there is the long established and unappealing habit of marginalising the war on the eastern front and the central role of the Soviet Union in defeating Hitler’s armies.

To challenge these myths is to risk being accused of hating Britain, yet for decades historians have been pushing back, offering critical analysis of the conflict that complicates simplistic narratives, introducing inconvenient facts and often unwelcome nuance. More recently scholars of the war have taken on the myth that explains why the imperial aspects of the war are so poorly remembered.

Fundamental to the way the war is now remembered is the idea that between 1940 and 1941 Britain “stood alone”. The myth of national isolation is particularly potent because it is one of the central pillars of the broader fantasy of British exceptionalism, a delusion that can only be maintained by wilful historical amnesia.

In a David Low cartoon, drawn as France was falling, and appearing in the Evening Standard on 18 June 1940, a British Tommy is shown standing by the coast. Rough seas hammer against the rocks and the bombers of the Luftwaffe thunder overhead. With a rifle in one hand, the Tommy raises his fist at the enemy aircraft. “Very Well, Alone” reads the caption.

By 1945 Britain had been joined by 2.25 million Indians and a third of a million Africans

Stirring stuff but Britain was not alone in June 1940. Indeed, over the six years of the war, Britain endured solitude for a matter of hours: on the same day Britain declared war both Australia and New Zealand issued their own declarations. Three days later South Africa entered the conflict and, the day after that, Canada.

By 1945 Britain had been joined in supposed solitude not just by the forces of the old “white” dominions, but by 2.25 million Indian soldiers (the largest volunteer army on earth) and a third of a million African servicemen. Almost 7,000 men from the Caribbean had joined the RAF and thousands of seamen from across the empire had served in the merchant navy. The empire sent money as well as men. Canada spent $1.6bn churning out RAF pilots and navigators, and the citizens of the distant Nigerian city of Kano, on the southern fringes of the African Sahel, raised £10,290. That money was sent to the British Treasury to purchase a Spitfire.

Just as Churchill is arguably more popular in the Britain of 2019 than he was in 1945, the empire’s contribution was better understood during the conflict. In 1943, the Daily Express complained, ‘‘We frequently say that in the Battle of Britain we stood alone. But we were never just these little islands entirely by themselves. Canadian troops were among us. Australian troops were here. From all parts of the Empire aid flowed to us in men and goods.”

And another cartoon, this one from July 1940, drawn by Cyril Bird, aka Fougasse of Punch Magazine, depicts two British soldiers sitting by the coast. “So our poor old Empire is alone in the world,” says one. “Aye, we are – the whole five hundred million of us,” replies his comrade. What was seen then as a strength and a reason for confidence has become a forgotten detail. One that is out of step with the prevailing myth.

Britain went to war in 1939 in the name of freedom and democracy, but fielded armies within whose ranks were black and brown men who were regarded and often treated as second-class citizens. To manage this contradiction the government attempted to recast the British empire as a project of partnership, rather than one of domination. Yet the racial hierarchies around which the empire was ordered were apparent even in the propaganda designed to play it down. One wartime poster, created to promote the idea of imperial unity and partnership, showed servicemen from the various nations of the empire marching together in uniform, the union flag fluttering above their heads. They march as one but the divisions are stark. In the first row is a Briton, Australian and Canadian, behind them a South African and New Zealander. Tucked in the corner is a soldier from the Indian army and at the very back, squeezed into the top left corner of the poster, is an African. The two dark-skinned servicemen are literally marginalised.

To convince Asians and Africans that victory for Britain was in their interest, concerted propaganda efforts were deployed to make them aware of the true nature of Nazism and its underlying racial theories. But in August 1941 a Nigerian newspaper put its finger on the dilemma, when it asked, “What purpose does it serve to remind us that Hitler regards us as semi-apes if the Empire for which we are ready to suffer and die … can tolerate racial discrimination against us?”

As a boy growing up in 1980s Britain, my friends and I were obsessed with the war and with the toy soldiers we endlessly played with. The crack unit among my own plastic legions were my 29 British Eighth Army troops. I can still remember the picture on the Airfix box they came in. Although I was taught about the war at school, watched the war films that were endlessly repeated on TV and borrowed books about the war from the library, nothing I learned or read led me to suspect for a moment that any of the soldiers of the Eighth Army were anything other than white and British.

The Eighth Army, the force shipped to north Africa to defend a key supply route – the Suez canal – from the Italians and the German Afrika Korps, was, in fact, one of the most diverse armies ever assembled. By 1941, the year of the siege of Tobruk, only a quarter of the troops of the British Eighth Army were British. As the historian Ashley Jackson has pointed out, the rest came from India, Sri Lanka, Australia, New Zealand, South Africa, Southern Rhodesia, Uganda, Tanganyika, the Gold Coast, Kenya, Nigeria, Bechuanaland, the Gambia, Sierra Leone, Swaziland, Palestine, Mauritius, the Seychelles and Cyprus.

Why did the picture on my box of Airfix soldiers not reflect the reality of the imperial, multiracial, multi-faith, polyglot army? Why were they all depicted as white, and what lessons about the war might my schoolfriends and I have learnt had they not been?