From the ruins of Old Panama, the first city founded in 1519 and destroyed by a British pirate, you can see the new buildings of the thriving Central American city.

Ruins of Panama Viejo, a city founded in 1519 and destroyed by a British pirate, whose name is not worth remembering. Subsequently, the city moved to the current location of the Historic District.

In the foreground, we can see the tower and ruins of the cathedral.

In the background the new buildings of Panama City.

Welcome to the Amalfi Coast!

air support, starfighters etc, if Russians come to attack from the air, they will be done quickly, whoever is in charge in the air wins the war. (and or at sea)
there is still time to have plans AB and C ready. The Russians will also want to flatten Kiev with missiles, so prepare anti-missile guns around the city. Article is right, if the subsoil (and watercourses, lakes, rivers) are frozen hard, that is Russia’s advantage. If Ukraine falls, the neighboring countries do not follow Nato, they also stand at the gates of Warsaw and then Berlin.

The Russians are going to try again, a ground attack on the Ukrainian capital Kyiv. Almost every Ukrainian is convinced of this, from the first student in the subway to the commander-in-chief of the army.

“I have no doubt they want to go back to Kiev,” General Valery Zaluzhny told the British magazine The Economist this week. The commander-in-chief’s statement made extensive headlines in the Ukrainian news. Others also expect a new Russian offensive, but expectations differ as to how and when.

As soon as the ground is frozen, the Russians will attack, General Sergey Melnik, the commander of the Kharkov military district in the east of the country, expects. In addition to an attack on Kiev, he also expects his city to face another ground offensive. Groups of ten to twenty Russian soldiers are already crossing the border to reconnoiter and sabotage, he says. Kharkov is about forty kilometers from the Russian border.

Cut off cities and arms supply
As in February this year, according to Melnik, the Russians will try to cut off Kharkov from Kiev, so that Ukrainian troops in the Donbas cannot move west to the capital’s aid. The Russians will also attack more to the west, towards a city like Rivne, which is located between Kiev and the Polish border. The aim would be to cut off the supply of Western weapons.

AFP
Satellite image from the first days of the war: on February 27, a kilometer-long column of Russian vehicles drives towards Kiev
President Putin is gathering more than 200,000 soldiers for the next round in the war. That is the number that the Ukrainian commander-in-chief mentions in The Economist. Melnik thinks there could be many more.

They will be poorly armed and poorly trained, like many of the recently mobilized soldiers. What the Russians themselves openly admit, is evident from their language use. Russian commanders speak of “single-use soldiers” (odnorazovye), General Melnik knows.

Because of the immense numbers, General Zaluzhny sees the Russians as a formidable opponent. “We’ll have to kill them all.”

Analyst: Russia lacks everything
Oleg Zhdanov, an independent military analyst and former member of the Ukrainian General Staff, does not think there will be an immediate attack once the ground is frozen hard enough to support tanks. “You have to have something to attack with.”

Zhdanov is resolute. The Russians are currently unable to launch a large-scale offensive. According to him, the Russian defense lacks everything, in the first place high-tech weapons.

“Stalin said quantity is more important than quality. Putin is trying to imitate him,” says Zhdanov. The results of this approach can be seen in the Donbas, in the bloody fighting around the city of Bachmut. Melnik: “Soldiers come running, covered in pills, without helmets, without vests.” The front line barely moves there.

Zhdanov estimates the number of Russian soldiers on the Belarusian border that could move towards Kiev at 10,000. He’s not worried about that. Also because the Belarusian army is not going to participate, for the simple reason that it has handed over all its weapons to the Russians.

The former colonel thinks the Ukrainian army should start paying attention when numbers reach 50,000 to 70,000. And then they must be well equipped. That will not work in January, Zhdanov is sure. “More realistic is March or even spring.”

General Zaluzhny at a crisis meeting this spring
The military analyst does not want to compromise the alarming words of Zaluzhny. But he does think the interview is intended for Western consumption. “Because we all know this.”

According to him, the interview to The Economist is mainly aimed at urging European leaders to speed up the delivery of weapons. And above all more. “Because with the approaching Christmas you see that the pace is slowing down.”

With what weapons are now coming from Europe, the war will last a very long time, says Zhdanov. “It’s enough to hold on, but not enough to win quickly.”

This is in the medieval section of the town. Sarlat was the first French town selected back in the 70s to be restored to its medieval glory (but with modern sanitation) and they have done a fantastic job, as evidenced by the large number of tourists. This Lab was here keeping an eye on the street when we were here 3 years ago and was still just as willing to have his neck scratched. 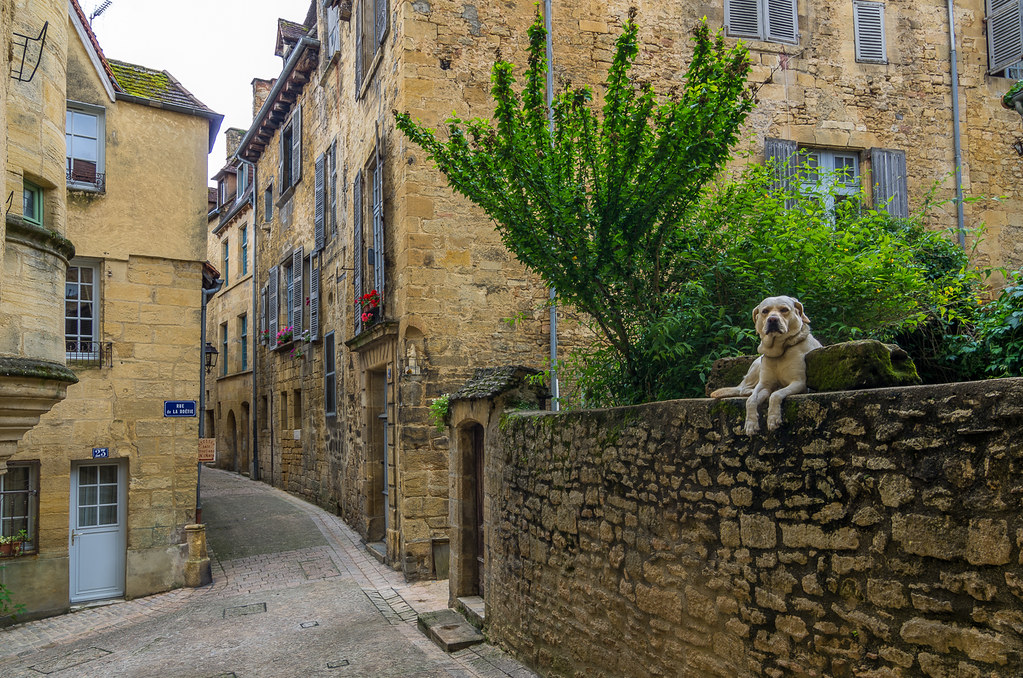 Turckheim is one of several medieval villages in this area that have brightly colored buildings and an abundance of flowers, even this late in the season. “Turckheim is also one of only a few remaining towns in France with a municipal night watchman, who makes the rounds at 10 PM between 1 May and 31 October, and on three Saturdays preceding Christmas. Maintained for touristic reason, the position commemorates a 13th-c event in which the night watchman prevented a fire.”